Please DO NOT CALL the office OR try to schedule a COVID-19 Vaccine through our on-line appointment portal.

Individuals MUST visit our COVID-19 Vaccine Pre-registration page and follow the instructions there!

Announcing Telehealth Visits for New and Established Patients (must be a Pennsylvania resident)!

If you are having difficulties with our patient portal, please e-mail help@healow.com for assistance. 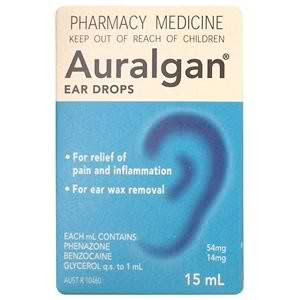 The FDA had US marshalls confiscate all supplies of Auralgan for illegally marketing it even after warnings, which the maker ignored.

Auralgan is a well-known, old fashioned ear medicine used for decades by ENT doctors to ease pain in patients with ear infections. Its been around so long that it has a well established record of efficacy and safety as well as a generic form that is very inexpensive. Right?…Wrong!

And this is the problem…deception.

It seems a well known trick in the pharmaceutical industry was used by the current maker of Auralgan to boost their profits. Years ago, Destin Pharmaceuticals bought the rights to the name Auralgan and then proceeded to change its formulation essentially creating a new medicine altogether.

What did they do exactly? Well, the original formula has 3 ingredients; benzocaine and antipyrine (aka phenazone), both pain relievers, and glycerine which would help dry the ear and relieve infection and swelling which contribute to pain. Simple. They substituted U polycosanol, a derivative of bees wax, for the glycerine, and added another commonly used ear medicine, acetic acid – aka vinegar- which helps get rid of infections. Still simple right? Not exactly. Here’s why; the generic form of the original Auralgan (A/B otic) sells for $12.99. The new Auralgan sells for $150.00 and it doesn’t do anything significantly different than the original formula (plus, the U polycosonal is untested in ear infections).

The end result, and likely intended by the maker, is that doctors continue to prescribe Auralgan thinking they’re giving the patient a generic drug when actually its much more expensive.

Where they got into trouble with the FDA is that they never applied for a new drug approval, which they are required to do, and continued to market Auralgan for ear infections and pain. They then ignored warning letters by the FDA which led to involvement of law enforcement to confiscate the drug.

Maybe the drug laws should be changed so that its illegal to re-formulate a brand-name drug. Really, what purpose does it serve other than to decieve the buyer into thinking they’re getting the old drug?

We are not scheduling COVID-19 Vaccine appointments through this portal.

Individuals must pre-register here; please follow the instructions and someone will reach out to you to schedule a COVID-19 Vaccine appointment ASAP.